ORION International Film Festival from Australia brings some of the best short films to Berlin! 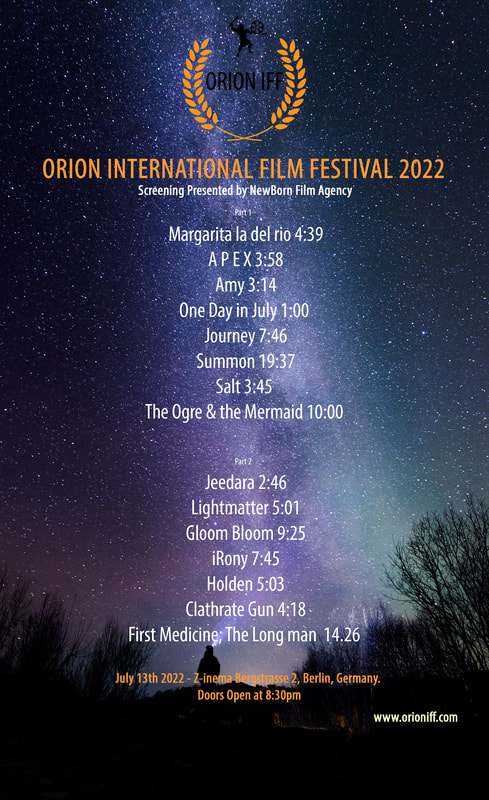 Margarita la del rio is a paper cut-out documentary/animation in Spanish that showcases moments in the life of a woman from Honduras who immigrated to the United States to support her family back home.
(This film is my junior thesis film for Rhode Island School of Design)

"Emergence of a hybrid human-alien consciousness from the void."
APEX explores the emergence of a higher life form, the convergence of intelligence and higher consciousness in the primordial void of infinite potential. A portal through which something more significant and far more malevolent has emerged.
This conceptual film was inspired by a love of the 'Alien franchise and the work of H.R Giger. The creature: a biological zenith, represents the pinnacle in natural evolution and higher consciousness.

Jo's background is in graphic design, and she's had a successful career in motion graphics working on both regional and national television programmes in England. Shows include ITV's This Morning, Good Morning Britain, Lorraine, Loose Women, ITV news and ITV Sport. Her two loves - sport and design have never really mixed but frustrated by the perceptions of female rugby players decided to challenge that and herself with this short film.


One Day in July - 1:00
Animation
Directed by Hermes Mangialardo
Italy

One child plays with sand on a beach, but a soldier comes with his gun.

Alone in space, an astronaut drifts through the empty void. After finding another astronaut in the same predicament, she gives him a polaroid image of the Earth.
They then team up to go on an epic journey across the universe to return to their planet. Will these star-crossed lovers find home?

Summon is an experimental short exploring the theme of female interaction and identity, mainly focusing on the female body's consumption and the relationship between white women and women of colour.

Salt – is essential for life. This aerial film explores the expansive beauty of salt throughout Utah. Journey across the Great Salt Lake, Lucin Cutoff, salt mines, Bonneville Salt Flats, & salt ponds with an interesting aerial perspective-bending of the surreal.


The Ogre and the Mermaid 10:00
Animation
Directed by Christopher Magee
United States

An ogre is pushed onto a deserted beach and encounters an enigmatic mermaid. Caught between fear and attraction, he must decide on whether to follow her into the deep.

The Morning creation story of Jeedara, the white whale who created the Great Australian Bight, and why the land he made is now under threat from oil drilling.

A black-and-white film that lets you see colours. Winner of 11 international film awards!
Attention! This film contains flashing lights which may not be suitable for light-sensitive epilepsy.
Initially barely noticeable, the first dim flashes of light become continuously brighter and more intense for five minutes. Towards the end, they become a staccato of light and dark stimuli that evoke psychedelic colour impressions in the audience. "Light Matter" takes advantage of a physiological phenomenon where the rapid change from light to dark triggers colour perception in the brain without the detour via the receptors of colour vision in the eye.

The world like I knew it was gone. Everything was dry, lean, harsh and collapsing. My brain was translating images of destruction and death, only seeing traces of old habits remaining in ruins. Sometimes I could hear distant noises of social movements, like radiations of a parallel universe evolving around me. But it's felt like too far away to be reached. What happened to these potentials? My mind was covered in sand and dust, slowly disappearing forever.

A film that explores the relationship between man and technology...told from the perspective of a phone.
Variously described as an Animation, an Experimental Film, a Narrative, a Documentary or a Film-Poem depending on who you speak to, this hand-drawn animated film is based on the poem 'Seven Billion' written by the film director that won 2 National poetry awards: The Young Australian Writer's National Award for Poetry, selected out of a field of 30,000 and the Karen W Treanor Poetry Award (Youth).

Holden is alone on her 18th birthday, stuck attending to her terminally ill mother's caravan park, when she meets her father for the first time.

We made a dark and beautiful video to parallel these dark and changing global times. Clathrate Gun from Tilman Robinson's album CULTURECIDE is out on Bedroom Community.
The clathrate gun hypothesis describes scenarios in which climate change induced thawing of permafrost releases methane deposits into the atmosphere at unimaginable quantity and speed. While the threat is still a topic of scientific debate, the potential burden on the atmosphere and the effects of climate change would be catastrophic.
The melodic content of Clathrate Gun was developed from a musical cryptogram created from the Paris Accord.